NO. 1 PORTAL FOR ENTERTAINMENT
HOME SONGSVIDEOSGistSFREEBEATS MixtapeSFOREIGN SONGS CONTACT US

Popular Nigerian rapper, Yung6ix, has revealed that several valuable items were stolen from his car in the United States. 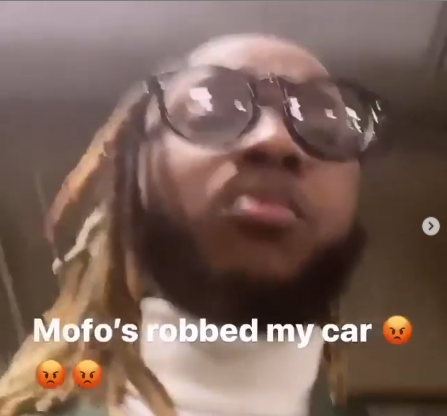 The enraged US based artiste took to his Instagram page to recount the sad incident.

According to him his car was broken into and some valuable items were carted away.

In a video posted on social media, Yung6ix expressed his shock that his customized teeth grillz can be stolen.

However, the rapper recently revealed he moves about with armed bodyguards.

The singer stated that he moves about with armed bodyguards to protect himself from the police who he claimed is supposed to be his protector, and not from his fans.